💠 Blockchain: a revolution in complete security?

Facebook Coin launched in summer 2019, bullshit made in Zuck or real innovation?

The New York Times announced at the end of February that the “Facebook Coin” would be launched by summer 2019. The primary objective of the “Facebook coin” would be to be used, like Bitcoin, for payments and money transfers via WhatsApp and Messenger. The famous social network could then become the first completely private central bank. Several questions obviously remain unanswered: Why use a blockchain for this system a priori close to a centralized solution like that of Paypal? Will Facebook take responsibility for transactions and for user identification? Will this responsibility be delegated to crypto-asset trading platforms (discussions are already underway)? What about legal and regulatory issues? What about the protection of personal data?

The second use of this “Facebook corner” would be to ensure user authentication in order to offer a more secure alternative to Facebook Connect, the tool that allows Internet users to connect to other sites thanks to their Facebook account. The idea evoked would be to allow the user to better control the data shared with third-party sites. The company headed by Mark Zuckerberg, which is going through a major crisis of confidence following the “Cambridge Analytica” scandal, is looking for a second wind. Indeed, Cambridge Analytica, this British company, had illegally used the personal data of more than 50 million users via the famous social network. Thus, since this scandal, Facebook has been abused on the stock market; losing more than 114 billion dollars - the equivalent of the value of Axa and BNP Paribas combined - in a single day! This is why the protection and security of personal data is therefore more than ever a major issue for both the user community and the shareholders. As proof, the Telegram messaging platform - which has 300 million users - has also chosen to use a cryptographic solution by encrypting and protecting the content of its users' communications, just like Whatsapp, the property of Facebook acquired. $ 22 billion in 2014, which also more recently adopted end-to-end encryption. Whatsapp founder Brian Acton nevertheless uncompromisingly claims to have “sold the privacy of his users for a large profit” and also says he has “made a choice and a compromise” and “live with that every day.”

Will “Facebook Coin” be the miracle solution to get the company out of this crisis? We will know more in a few months but it is certain that this announcement will bring to the fore the usefulness of the blockchain in securing data and especially allow a greater adoption of crypto-assets than today.

The promises of blockchain to secure data and information

As a reminder, the blockchain is a computer protocol making it possible to keep online a kind of large common register, unfalsifiable and unalterable. The most famous blockchain, and which has inspired all the others, is the one used by Bitcoin. Three main roles seem to be able to be fulfilled by this technology: certification, identification and execution of transactions. The central promise of this technology is the impossibility of altering information; their authenticity is ensured by a complex cryptographic process.

Synthetic diagram of the definition of blockchain (source EY)

It can be sounds, images, photos, documents, currency or digital objects ... or anything that can be exchanged on the Internet. Therefore, if it is impossible to distort or modify the information exchanged, confidence is thus restored - once the registration in the distributed ledger has been carried out - which naturally promotes transparency.

The watchword would now be to promote only public blockchains, by nature - theoretically - deeply decentralized, where no economic agent can control the functioning of the system to distort its original utility. Data recorded in the blockchain which is indelible must not be modified a posteriori. Bitcoin is, for example, a perfectly decentralized blockchain because it is impossible for a player, no matter how powerful, to change its consensus (I am not deliberately talking about the 51% attack which is very unlikely on Bitcoin in my opinion. ). Now, many startups are looking to exploit the possibilities offered by the Bitcoin blockchain to provide open, interoperable proof of existence, verifiable by anyone and without going through a trusted third party.

On the topic of digital identity, blockchain nevertheless offers the promise of a register accessible to all, decentralized, transparent and above all perfectly secure. Obviously, there is no question of sharing with the general public a register of identity information readable by everyone. But it is nonetheless conceivable to manufacture processes based on the sharing of certified authentic data by a trusted third party, secured by their owner and made indelible and non-modifiable by blockchain technology.

Ultimately, this technology would allow the population to reclaim their personal data in a secure and transparent manner. This way of conceiving the digital identity would also make it possible to guard against a malicious attack by a hacker - there are also bug bounty solutions allowing to have the robustness of an IT system tested by ethical hackers - or against the potential direct intervention of governments in power.

Unlike a solution controlled by a single actor, badly perceived by the general public, a “blockchain” solution presents significant advances in terms of privacy protection and personal data security. In this system, no party, except the person concerned, would have access to all the information. It will nevertheless be necessary to trust the one who will access the data at the end of the chain because it is mainly in their use that the abuses occur that we would like to avoid.

As proof of the current enthusiasm in this new market, the tech giant Paypal has just invested in the capital of a startup that develops digital identity solutions. This company uses the Blockchain to create a decentralized system to give customers back control of their personal data. This type of solution - which financial institutions should use massively in the coming years - aims to simplify the process of knowing your customer, the famous KYC, while improving the user experience and complying with regulatory requirements more and more. stricter in terms of data confidentiality (GDPR in particular). 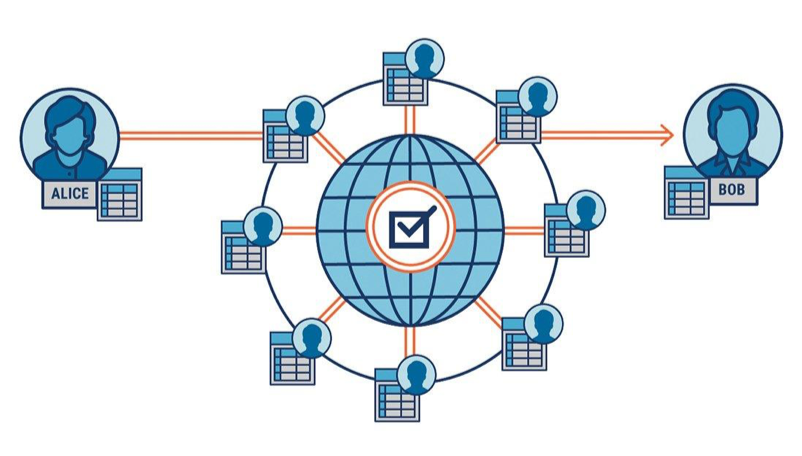 Moreover, as robust as blockchain technologies are, they all rely on on a fundamental element: the possession of a private key, the only means with which it is possible to modify, add new information or give access to it to a third party. A malicious person could, using the owner's private key, steal his personal data to use it on his behalf and carry out operations on his behalf. Using blockchain to secure digital identity would empower the population more. It is the logical counterpart of this reappropriation of personal data.

Systems already exist allowing several administrative documents to be brought together in a single and secure ID: Vital card, driving license, identity card, passport, etc. The effectiveness of these initiatives for the States no longer needs to be demonstrated, above all in the optimization of administrative management time - and therefore a reduction in public expenditure - what is more, extremely easy to use and above all perfectly secure. This is already the case in Estonia, where identity is entirely digital through “E-identity” and where 98% of the population uses this process to identify themselves. Thus, this small country in northern Europe, which still has 1,3 million inhabitants, has decided to use the blockchain to manage information exchanges with public administrations and record them in a tamper-proof manner.

To conclude, the advent of “blockchain” technology offers the opportunity to bring together two concepts that are a priori contradictory: the protection of personal data and the massive adoption of new technologies. It is not certain that Facebook has the same approach on this subject!