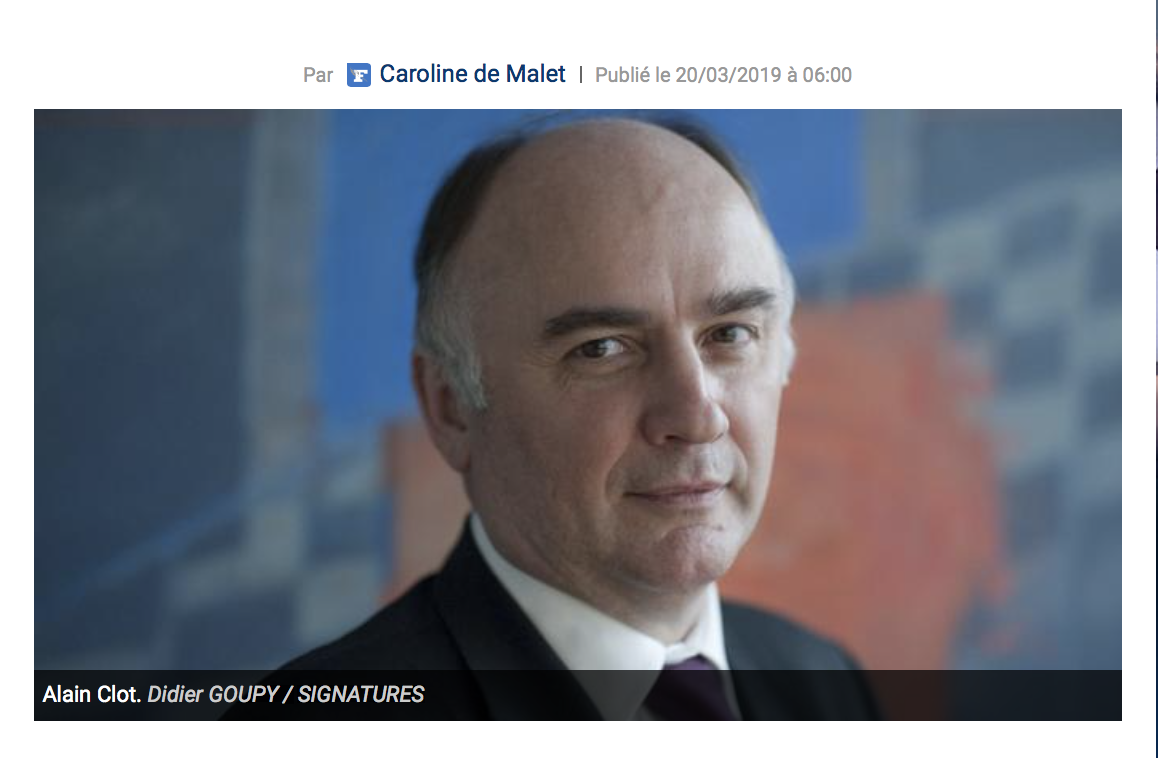 For the president of France Fintech, who will speak at the Big Bang Eco on March 27, these young companies are pushing banks to transform.

LE FIGARO. - How is the fintech sector doing?

Alain CLOT. - The sector is experiencing strong growth: 365 million euros were raised in 2018, for 72 operations, an increase of 15%. This represents an average ticket per start-up of 5,2 million euros. The latter are internationalizing very quickly, the majority being present in several countries. And their model is moving from a specific service to a service platform offering a complete journey. In fact, we are starting to have a dynamic ecosystem, in which everyone talks to each other.

Which are the most promising start-ups?

The bigger ones, October, Lydia, Ledger, Younited Credit, Alan and Shift Technology are almost all in the top 2 or 3 in their market. Almost all of them are present in five or six foreign countries, in Europe and Asia, and have raised amounts of around 30 million euros. We even have future unicorns. Ledger is the only French start-up to appear in the ranking of the top 50 global fintechs from KPMG and + Simple.fr and Shift Technology, which has just raised 53 million euros, are among the 50 emerging companies.

How is French fintech positioned in Europe?

With Brexit, Great Britain will lose and France is doing quite well. Being the first European country in terms of artificial intelligence laboratories, the second in number of start-ups in AI and the first for incubators especially with Station F, we are also very good at cognitive science and finance. London having won half of European fintechs, France could therefore benefit from Brexit as part of the rebalancing that is taking place. In venture capital, we are already number two in Europe. We have a very important card to play.

Isn't regulation a brake on these innovations?

It has been a drag in the past because it was designed in France to protect consumers by reducing risk and curbing competition. Today, while it is the European regulations that are needed, such as the GDPR or the Payment Services Directive 2 (DSP 2), it rather plays a strong role in acceleration.

Do these new players represent a threat to traditional banks?

We can think so. Yet fintech is not the problem but the solution. This forces the banks to modernize, to reinvent themselves. It is a way for them to prepare for the offensive of the Gafa, who are all in finance, whether it is Google, Facebook or Alibaba. But the share of crowdfunding out of all the amounts financed is still very low. In terms of payments and aggregation, the new players occupy a more important place. The latter are less present in investment advice. However, the needs are growing, with the need to capitalize earlier and earlier, and artificial intelligence makes it possible to have a much more global vision of heritage.

Have network banks been able to adapt to this new situation?

They have done a lot of acculturation work with fintechs, win-win. Most are in the process of reinventing themselves. They offer their skills to other providers. But the weight of the heritage (central computing and culture) is very heavy. And online banks, linked to them and all losing money, are a thing of the past. The number of millennials has just surpassed that of baby boomers in the United States. However, students' attachment to a brand like Lydia for example is very strong.

How do you see the traditional players evolving over time?

They will not escape productivity gains and will have to focus on value-added services such as wealth advice. Because they are not alone in this niche (Gafa, telecom operators, mass distribution). But the banks are trusted third parties, it is an important capital.