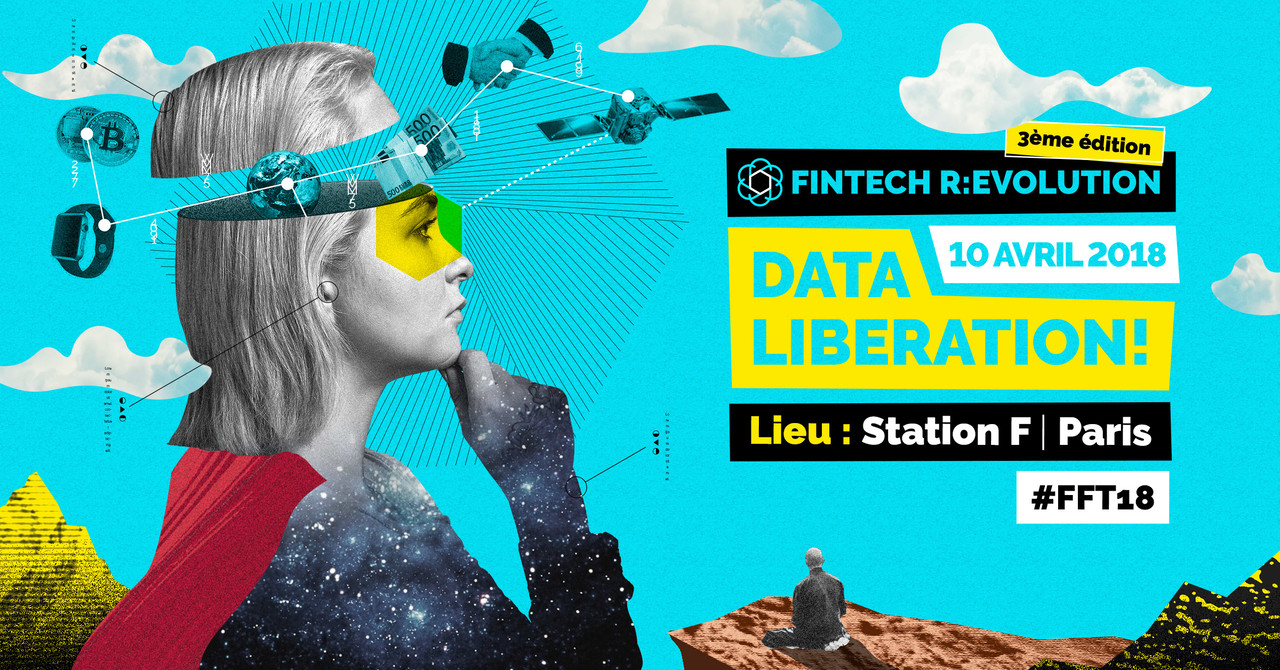 France FinTech, the association created by French Fintech entrepreneurs, presents the 3rd edition of its annual event, Fintech R: Evolution. This unmissable event for the entrepreneurial and financial ecosystem will be held Tuesday April 10, 2018 from 13:00 p.m. to 20:00 p.m. in Paris, in the heart of Station F, the largest start-up campus in the world!

France FinTech is committed to promoting excellence in the sector. In two years, Fintech R: Evolution has become a benchmark thanks to its unique positioning; selection of exclusive speakers, choice of prospective themes, diving into the heart of the ecosystem. Driven by the pioneering dynamism of France, Fintech R: Evolution is the event that highlights the best of entrepreneurs, conquering leaders but also promising young shoots.

3, 2, 1: Data Liberation!
.
If the first wave of FinTech mainly concerned new uses, the second is characterized by the emergence of new, more complete models, supported by massive advances in data technologies, artificial intelligence, blockchain and internet of things.

Data is now playing a central role in the financial services revolution by putting the customer and the consumer back at the heart of the system. Their essential “release” is subordinated to the construction of an efficient regulatory system.

For Alain Clot, President of France FinTech: “ The world of financial services began its revolution with the goal of better serving consumers. To protect them, a secure legal and regulatory framework is essential and France FinTech is fully committed to its development. The current exercise of transposing the second European Payments Directive must guarantee fairness between all players and not compromise the innovation driven by fintech. It is vital that, in this period of decisive transition, the public authorities are strongly involved in ensuring that the letter and the spirit of European law are respected in order to allow the emergence of French and European champions. Hurry up. It is in the interests of consumers, growth, skilled employment and ultimately our sovereignty ».

Profound changes in the regulatory environment (RGPD, DSP2, etc.), artificial intelligence, blockchain, hybridization of business models, new financing trends, etc. are all topics that will be addressed this year, in their dimension
technical, political and ethical as well as with regard to the cases of application envisaged.

In addition to conferences and testimonials from those who are shaping the future of our financial environment, Fintech R: Evolution will once again offer this year an immersion in the heart of innovations through a demonstration and initiation course.

In particular, the following are expected:
Bruno Le Maire - Minister of the Economy and Finance -, Luc Julia - VP innovation of Samsung, Creator of Siri -, Aurélie Jean, PhD - numerical scientist and entrepreneur -, Arthur Breitman - founder and CEO of Tezos - Odile Renaud-Basso - Director General of the Treasury -, Eric Larchevêque - founder and CEO of Ledger -, Laure de La Raudière - Member of Parliament -, Gaspard Koenig - professor of philosophy, author of numerous essays and novels and President of the GenerationLibre think-tank - and many others personalities to be announced soon.

Throughout the afternoon, more than a thousand participants (entrepreneurs, venture capitalists, journalists, media, regulators, influencers, political figures, etc.) will be able to take advantage of networking sessions and meet the most beautiful French fintechs.

Take part in the fintech revolution and see you on April 10, 2018!
Information and ticketing available on Data Liberation!